We at Stellar Digital are strong believers in the power of local marketing and community engagement.

Last week, the week before the AFC Championship matchup of the Kansas City Chiefs and the New England Patriots, we spotted a social post from Goodcents Subs including footage of the Chief’s rising star quarterback, Patrick Mahomes. This KC-based chain specializing in deli fresh subs has very intelligent people in the marketing department who know better than to use this without his permission. So, what is going on!?

It turned out the Mahomes footage was part of Goodcents’ new campaign focused on the hard work that goes into achieving excellence. “You can’t fake excellence, you can only build it… Whether it’s waking up early to run laps or bake bread, you can’t cut corners, you can’t fake results,” the voice over so wisely says.

We caught up with Arielle Long-Seabra who heads up marketing at Goodcents to get the scoop. The first question was, of course, how did you make it happen? Long-Seabra responded, “We reached out to his agent and told them we were a Kansas City company trying to drive home our 30-year history and really wanted to partner with him.” She added, “It’s free to ask and he said yes.”

Though national deals are usually more lucrative and have wider audiences, Mahomes’ agents are focused on forming relationships with local companies first. That’s why some of Mahomes’ earliest deals were with Kansas City companies like Airshare and CommunityAmerica Credit Union.

Goodcents is a smaller company and not a brand you’d necessarily expect to have the hottest new NFL quarterback as an endorsement partner. It may be because of this that Mahomes’ teammates were sharing the Goodcents spot on social media. Does that same good will exist around large, national endorsement deals? 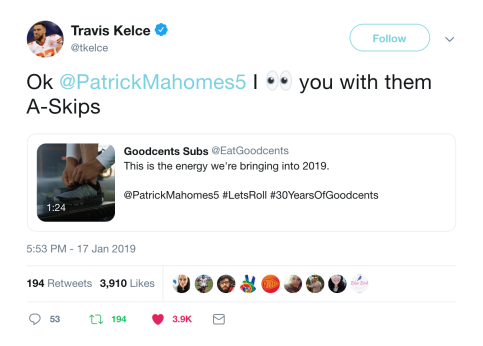 Through limiting his commercial exposure and valuing relationships over transactions, Mahomes’ agents are setting him up for even greater success in the not-too-distant future.

Long-Seabra recognizes that there may have been some special alignment of the stars to be able to produce this spot and have it out on social channels in the week leading up to and during the AFC Championship game. We’re loving the audience reactions.